Even if you don’t follow sports, you’ve probably heard the news about NFL super-star running back Adrian Peterson being indicted in Texas on charges of “reckless or negligent injury to a child.” Since that news came out, it’s been reported that he had also injured another one of his kids in the past. The league and the Minnesota Vikings have been confused about what to do, but apparently once the money (sponsors) started talking, the NFL and the team listened. Peterson will not play this season. And I think that is the right call.

Peterson is a lot younger than I am but it sounds like he grew up in a similar culture where “whoopin” your kids to make them behave was just part of responsible parenting. I guess I was lucky. My folks weren’t much on “whoopin”. I can remember a few spankings, but nothing major. I got one belt spanking from my Dad when I was 7 or 8 years old and it was for something I did not do. After the truth came out, he was crushed and he never laid a hand or a belt on me again. But even that “belting” did not leave any marks and as I recall, it didn’t hurt much. I was more pissed off and hurt by the injustice of it than anything else. However, I did a lot of other stuff that deserved punishment, so I figured this was just evening out the scales. It did leave me with a strong inclination to investigate accusations before jumping to conclusions. So I guess it turned out to be a good life lesson.

I knew other kids who got a lot of “whoopins”. From what I could tell, it did not do much good and probably made them even worse. And I can remember when teachers and coaches regularly “paddled” kids or gave out “licks” for misbehaving. Men paddled the boys and women paddled the girls. Everyone wanted to get a few licks now and then just to fit in and I got a few, but not often. And if it was really serious, they told your parents. I only had one instance where my parents were brought in and I was already in high school by then. It wasn’t that bad. Some of us cut class, “borrowed” a boat and went out drinking beer at the lake. Actually it was epic and one of my prouder moments for which I really got my tail-end busted by the high school principal. He was a former coach and football star who was strong as a mule and tough as nails. Those licks left marks for awhile. Although it was painful, it was over quickly and didn’t really cause me to see the error of my ways. A couple of months of picking up trash on the side of the highway would have probably made a longer, more lasting impression.

There may well be a time and place for “physical intervention” with kids, but it’s rare and it should not be violent or delivered in anger. Some of my Christian brothers and sisters quote the Bible about corporal punishment being ordained by God and if you love your kids you’ll spank them when they misbehave. I call B.S. on that and remind them that the Bible also calls for stoning a disobedient child (Deut 21 v 18-21). Pretty sure that’s a felony these days. So let’s not quote scripture to justify “whoopin” our kids.

On the flip side of the argument, I fear that the pendulum may have swung too far in the other direction. We are now reaching the point where any level of physical punishment or even raising ones voice to a child is considered abusive. Basically, anything that is “negative” or makes the child “feel” bad about themselves is potentially abusive. I don’t think the touchy-feely, time-out, talk about it, let’s process it and understand why you’re being a little asshole approach is in the best interest of the child or society in general.

Like most things in life, the truth is somewhere between the two extremes. Adrian Peterson has become the poster child for one side. But let’s not stand by and allow another generation of children to become undisciplined, self-absorbed narcissists with no sense of right and wrong and no boundaries. There are enough of those out there already. I think the Bible gets it right when it comes to that reaping and sowing stuff. 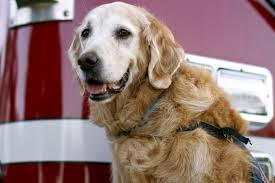 If you have read my blog in the past, you know that I’m a sucker for dogs. This week there was another dog story and if you missed it here’s the link: http://news.yahoo.com/last-rescue-dog-ground-zero-9-11-125658339.html.

Bretagne is a 15-year old rescue dog who has been nominated for a Hero Dog Award for a lifetime of service. She was only 2-years old when her owner brought her up to NYC after 9/11 to help with search and rescue efforts. She was back in NYC last week, 13 years later.

There were a lot of search and rescue dogs there in September 2001. Bretagne is the only one still alive. She has gone gray and slowed down, but seems to be doing quite well for such a old dog. If she could talk, what would she say about the new skyscraper that stands so near where she once moved quickly and gracefully through the burned out rubble at Ground Zero searching for life or just what had been life before those planes hit the Towers? Does she remember comforting the rescue workers who knew that their efforts were more about recovery than rescue, but still held out hope that someone might be alive down there somewhere? Did she ever ask what happened or why?

Bretagne retired from search and rescue in 2008 and now serves as an ambassador for search and rescue dogs, visiting elementary schools to play with the children while others tell her story. Younger dogs have taken her place and they too will grow old. They will also find themselves searching for whatever is left after disaster strikes. Man’s best friend doing their best in a broken world. We could all learn a lot from our dogs. 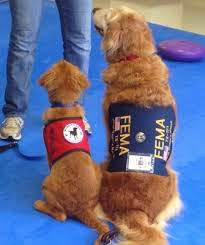