There is a documentary series available on Paramount Plus that follows a small-town Texas football program over the course of two seasons.   The town of Strawn, Texas is so small that it can only field a Six-Man team.  But, make no mistake, Six-Man football is still a big deal in the state of Texas because….well…because it’s football.   Texas is a huge state with a lot of small towns.  More than 150 of them have Six-Man football teams.  Most are not very good, but a handful have developed exceptional programs that consistently win and compete for the coveted state title. 'Texas 6' is about one such program.

Strawn is half-way between Fort Worth and Abilene, almost metropolitan compared to some Six-Man teams in Texas.  As an example, Sanderson in far Southwest Texas is 150 miles from Odessa, 200 miles from San Angelo and almost 300 miles from San Antonio.  Strawn is in Palo Pinto county, a place rich in western heritage.  A place where Comanche Indians once ruled, where Oliver Loving and Charles Goodnight ranched, a place of oil booms and busts.  Now it’s mostly just a place where State Highway 16 crosses Interstate 20.   A forgettable place passed over by truckers, trains and travelers.  A few stop at Mary’s Café for one of the best chicken fried steaks in Texas.  And there is dove hunting and deer hunting that still draw people out from the city.  But mostly no one stops and no one cares much about Strawn, Texas.

Being a Texan and a fan of high school football,  I thought the series was great.  But what really struck me was how much it reflected the America that is overlooked, discounted, disparaged and even despised by our “Wealthy Elites”.   Strawn Texas is uniquely Texan, but it has a lot in common with other rural communities and small towns all across America.  I would venture to say that any small town which  is more than an hour’s drive from a major metro area has more in common with the citizens of Strawn Texas than they do with those of major metros within their own state.  Even more so if that small town happens to be located in the South or Midwest.

Palo Pinto County Texas was once solidly Democratic; known back in the day as Texas “Blue Dog” Democrat.  No more.  Over 80% of the votes are now Republican Red.  It’s a poor, hard-scrabble, working class county that votes totally opposite of the way poor, hard-scrabble, working class counties in Texas voted 50 years ago.  This shift is not unique to small town Texas.  It’s happened all over this nation and it’s foundational to the extreme partisanship and division we now experience.

Too many on The Left, including the mainstream media, want to chalk it all up to a toxic mixture of racism, misogyny, Christian fundamentalism, homophobia, right-wing conspiracy peddlers and just plain old stupidity.  Deplorables clinging to their guns and religion.  Unfortunately, the real life of people like those in Strawn, Texas is not well-known and seldom portrayed accurately.  We are more likely to see movies and television shows about people and events which are familiar to those living in big cities or the surrounding urban sprawl.  When life in small town America is shown, it tends to be either idealized or demonized.  The truth, as is most often the case, is somewhere in between.

Texas 6 shows us life in a place where many families live below the poverty line.  Kids are being raised by single moms and grandparents. There are problems with alcohol and drugs.  Teachers and coaches do their best, but too often it's not enough.  Old men hold court over cups of coffee in the convenience store that serves as the local gathering spot.  Mostly they talk about football, the weather, livestock prices and the past.  When politics are discussed it’s with disdain for both parties and politicians in general.  There is a tone of resignation, mixed with patriotism and sadness. Whatever white privilege that may have existed left this town long ago.

So they vote for the lesser of evils, for the charlatans who are not as likely to disrupt what’s left of their way of life.  They cling to the hope reflected in their little high school football team, as well as their guns and their fading faith.  The kids and coaches kneel and say the Lord’s Prayer before each game and then rise to shouts of “Now let’s go kick the shit out of these guys”.  Those who have graduated, lean on the cyclone fence around the football field and remember their best days as they cheer for today’s heroes. Kids who would likely be faceless and nameless in big city high schools are stars in Strawn.  The players, the cheerleaders, even the water boy; everybody know who they are and that matters.  Most of them will move away and live out their lives in the suburbs, barely knowing their neighbors and watching their own kids disappear into the crowd. But they will remember what it was like once upon a time growing up in a small town. 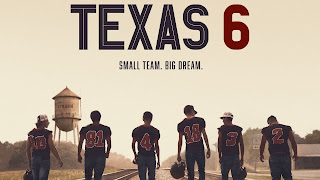 Some of my fellow Christians criticize me for watching “secular” television shows and movies that contain sex, violence, profanity, etc. and worst of all, the “wrong message”.  The wrong message being anything against God, Christianity or The Church.  Granted some shows have no redeeming qualities and are nothing but blood and guts, boobs and butts, f-bombs and worse.  If I see one going that way, I turn it off.  I’m just not interested and it does one no good to watch or listen to that mess.

But there are shows that transcend their irreligious, dark side of this world messaging.  They tell stories about the human condition in ways that move me to be even more thankful for the faith God has given me and to be even more committed to becoming the person He wants me to be.

One such show is on Netflix.  “After Life” just wrapped up it’s third and final season.  The creator and writer of “After Life” is Ricky Gervais, an award-winning English comedian.  Frankly,  I was never a Ricky Gervais fan.  Watching him host the Golden Globe awards I found him unnecessarily crude, mean and vulgar.  And his stand-up routines are even worse.  I could not imagine what he might do with a television series.

But I gave “After Life” a shot.  And almost turned it off during the first episode of season one.  Gervais appeared to simply be playing his usual nasty, despicable self.  But there was a compelling back story to the show and an interesting supporting cast.  Gervais’ character, Tony, is a would-be journalist working for a struggling small-town newspaper.  He has lost his wife to cancer.  Now his life consists of watching old videos of his lovely, charming wife while petting his dog and getting drunk.  His wife was truly the love of his life, his best friend and his reason for living.  After losing her, he is just wanting and waiting to die, being miserable and making everyone around him miserable.  Sounds like an uplifting show, right?

Tony’s nihilism mixed with biting humor and sarcasm is at times funny, brutally honest and consistently dark.  Most of the other characters are struggling, anxious or clueless; but also interesting.  A few attempt to express some vague message of hope in the hereafter and a murky faith in some higher power. Without being too much of a spoiler, the series ends on what is meant to be a happier note.  Essentially the message is that this life is all there is, be nice and kind to others, do what you can to make things better and then leave the stage for the next actor.   There is a hint that your loved ones may be waiting for you on the other side or perhaps it’s just a memory that also disappears when you do.

After Life is a genuinely well-done series.  The writing is exceptional, the acting spot-on and the production top notch all around.  The music is perfect, always fitting and tugs at your emotions.  However, “After Life” left me with a deep sense of sadness.  Yes, I realize it was just a television show and it was fiction. But it looked a lot like modern life for so many people.  Those who search for the big answers to the big questions but fail to look beyond this world.  So many people believe only in what they can experience or what makes sense to them.  They may hope there is more, but all their efforts go toward finding happiness in the here and now, until they either give up or die trying to find it.

As I said, shows like this make me even more thankful for God’s grace.  Grace that brought me to the faith and sustains me.  Shows like this also give me perspective and understanding in my relationships with those who do not believe in an afterlife or anything else other than what exists in the material world. It challenges me to live in such a way that others may seek to know what I believe and why I believe it.  To be a witness, to give testimony to the truth not only in word but also in deed.

For if the dead are not raised, not even Christ has been raised. And if Christ has not been raised, your faith is futile and you are still in your sins. Then those who have fallen asleep in Christ have perished. If in Christ we have hope in this life only, we are of all people most to be pitied.