“He hath eaten me out of house and home, he hath
put all my substance into that fat belly of his…” - Shakespeare


So it turns out that repealing and replacing the not-so Affordable Care Act, aka Obamacare, is hard to do. Fixing it may not be any easier. There are those who do not want to take anything away from the current offering. There are those who want to take a little bit away. And there are those who want to strip it to the bare bones. And they all have their heels dug in. This mindset is why we have a $20 Trillion dollar national debt and are pretty much guaranteed to keep adding to that debt as long as we can get away with it. It’s why entitlements such as Social Security, Medicare, Medicaid and various other social “safety nets” ; taken together representing almost 50% of federal spending, are untouchable and ever growing. And the unfunded liabilities associated with Social Security and Medicare aren’t even on the books.

There are hardcore conservatives who want to turn the clock back on most entitlements, starting with the Affordable Care Act. The progressives (liberals) only see the need to do more, give more and get more votes in return. There are some moderates in the middle who are doing their best “can’t we all just get along” dance; but it’s not working.

I live in a very red county in a very red state. And I’m mostly conservative, especially on fiscal issues and foreign policy. Not so much on social issues. The sad truth is that this last election cycle was likely the final hurrah for conservatives. Things are changing, even in Texas. In the major metro areas, age and ethnic demographics are pointing left. And this is pretty much the trend across the country. It will accelerate if Trump fails over the next four years and it appears increasingly likely that he will. The Democrats are committed to stopping him and not all of the Republicans are committed to supporting him. Throw in his own craziness and self-inflicted wounds; and the Democrats will gain ground in the mid-terms then regain the White House in 2020 (as long as they don’t select a really bad candidate again).

So what does the future look like? I mean the future from now to 2030. Federal spending will grow along with entitlements, including more funding for healthcare. Taxes are going up. It may not all be in the form of income taxes, but the government has to find more revenues. The debt will increase, but a growing economy may slow down the rate of that increase. America will still be great, but very different. More left turns than right turns eventually puts you somewhere farther to the left. I hope I’m wrong. But there’s an old saying about having the world’s greatest opportunity to screw up the world’s greatest opportunity. We may just be watching the GOP do exactly that.


I have always been a “mountain person” not a “beach person”. But that may be changing. I recently spent a couple of days on the Georgia coast. My wife and I had visited there over 25 years ago. Our first trip had been to St. Simon’s and this time we opted for nearby Jekyll Island.

We were there in mid-week, before Spring Break and the beaches were empty. Mountain people tend to prefer solitude which may be why I’ve never been much of a beach person. I could never afford to go to a secluded beach. So my beach experiences have been of the Texas Gulf Coast or Florida public beach variety which is akin to Wal-Mart on a Saturday afternoon. Tolerable if you’re about half-drunk, but otherwise unbearable.

The beach at Jekyll Island was perfect. Walking there at sunrise is a worship experience no matter who or what you worship. It’s just in our DNA. For a Christian, the first light of daybreak says “in the beginning”. The sky, the water and the beach speak of creation. Let there be life. Birds are everywhere. Small island deer stand frozen in the dunes then disappear. High tide has just passed and the waves are retreating leaving signs of life and death on the wet sand. It is as it has been for thousands of years. Ebb and flow, moon and sun.

And I believe there is, indeed, a purpose to all of it. It did not “just happen”. Something does not come from nothing. There is a “first cause”. We call it God. And for Christians it is personal. Life is short, eternity is forever. That beach is somewhere in between. Someday it will all come together. And the mountains will be there as well. 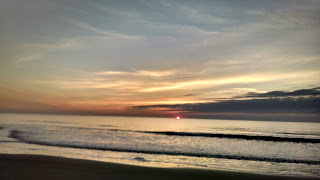