“The United States is the only country that elects a politically powerful president via an electoral college and the only one in which a candidate can become president without having obtained the highest number of votes in the sole or final round of popular voting.”
—George C. Edwards

I’ve already voted. Last week. Not sure what difference it makes, since my state is always a lock for the Republicans. All I can hope for is that if the nationwide popular vote result differs from the Electoral College result, we might once again consider doing away with the Electoral College or, at least, modifying it in some way.

I understand the arguments for the electoral approach and it probably made a lot of sense back in the day. And when you read your history you will note that slavery and women’s voting rights, or lack thereof, played a major part in the agreement to use “electors” to pick the President and Vice-President. There is also a deep conversation about Federalism and states rights woven into the fabric of the electoral debate.

But it’s time to move on. We are living in different times. The electoral system has created a situation where the race for the most powerful office on the planet is determined by a few states. More specifically, by a few key counties within a few key states. I don’t think this was what the founding fathers had in mind when they came up with the electoral concept. (What they really had in mind was for the Congress to elect the President and Vice President. They weren’t real keen on giving too much power to the masses either.)

One can argue the merits of different voting systems and fairness to small states or rural population vs. urban population. But, when it comes down to it, the best approach is one person-one vote. Most votes wins. 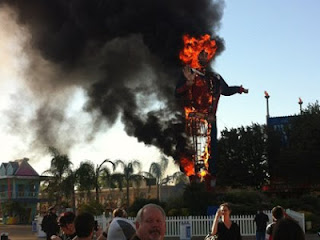 “What is the feeling when you're driving away from people, and they recede on the plain till you see their specks dispersing? -it's the too huge world vaulting us, and it's good-bye. But we lean forward to the next crazy venture beneath the skies.” – Jack Kerouac


This week I attended the American Trucking Association (ATA) Management Conference and Exhibition in Las Vegas. It seems like I end up in Vegas at some convention every other year. My first visit to Vegas was back in the late 70’s. So I’ve watched Vegas evolve (or perhaps dissolve) for over 30 years.

Back in the day it was hardcore. Serious gamblers, street whores, drugs and really cheap meals. It was like this giant peep-show for tourists from Middle America. It looked and smelled nasty and dangerous. It felt like the last place on earth you wanted Jesus to find you when He returns. In other words, it was outrageous and naughty fun.

Also, back in the day, amateurs were not welcome at the tables. Dealers were downright rude if you did not know table etiquette, the rules, the words and the gestures. Go play the slots, Opie. The tables were for Wise Guys and WWII vets who knew how to gamble. And if you loved to gamble, Vegas was THE place to go.

Nowadays Vegas is the adult entertainment capital of the world with kiddie rides. It’s the people of Wal-Mart, Godzilla movies and the French Foreign Legion all wearing the same tank tops, stumbling along in the same flip flops, taking the same stupid photos with the same i-phones. There are still a few gamblers, mostly in the poker rooms and sports books. But essentially it’s Branson Missouri and Disney World with shorter lines and more expensive food. If you love to gamble, it is no longer THE place to go.

Fortunately, I was never really that much into gambling. I consider myself a disciplined loser. I take x-amount of money and lose it at a pace commensurate with the length of my stay in Vegas. As I’ve gotten older, I take less money and don’t stay very long. Besides, if I really wanted to gamble I’ve got a couple of ginormous Indian casinos just across the Red River. I can lose just as much money there and keep it in the local economy. The fact that I’ve never set foot in one of those casinos tells you how excited I am about gambling.

So for me, Vegas was never about gambling. It was about the “experience”. It was about watching people roll around in the belly of the beast. It was a human train wreck and you could not take your eyes off of it. There were characters and stories and vows that you would never go back there again. What used to happen in Vegas did NOT stay in Vegas. It stayed with you. Once upon a time Vegas was memorable. Now it’s just an over-priced, premium channel on the big screen that used to be America.