As we head into The New Year, we should all think about this: 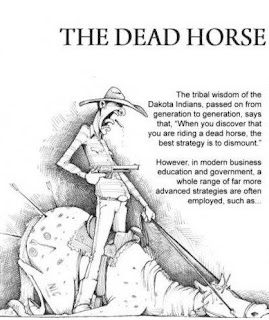 • Appointing a committee to study the horse.

• Arranging to visit other countries to see how other cultures ride dead horses.

• Lowering the standards so that the dead horses can be included.

• Re-classifying the dead horse as living-impaired.

• Hiring outside contractors to ride the dead horse.

• Doing a productivity study to see if lighter riders would improve the dead horse’s
performance.

• Declaring that the dead horse does not have to be fed,it is less costly,carries lower
overhead and,therefore, contributes substantially more to the bottom line of the economy
than do some other horses.

• Rewriting the expected performance requirements for all horses. And of course….

• Promoting the dead horse to a supervisory position. 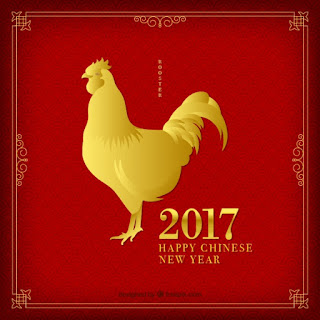 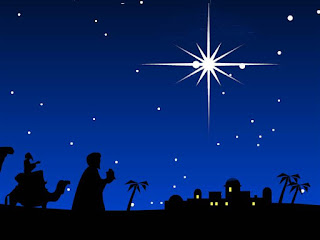 
While the news is loaded with stories about the lack of good jobs and young college graduates living in their parents’ basement, the reality is that there is a shortage of talent. Employers are having a tough time filling jobs. The unemployment rate for people age 25 and over is now 3.9%. For those with college degrees it’s down to 2.3%. Let that soak in. While economists debate the definition of what level of unemployment effectively translates to “full employment”, the numbers range from 3.0% to 5.5% with 4% being the most widely accepted number. After the Great Recession, there were 6.5 unemployed people for every job opening. That is now down to 1.4 unemployed per job opening!

When you look at the total labor force 16 years of age and over the rate is 4.6% but that number is heavily impacted by high rates of unemployment in the 16-19 year old group. African-Americans, Hispanics and those without high school degrees also have high rates of unemployment. So we do need to figure out how to get these folks into the work force. It’s a big issue, no question.

But, if you are an employer looking to hire experienced, qualified talent; you’ve got a problem. They are out there, but they are working and they are not likely to change jobs without a really good reason. It could be money, job content, company culture, career path, work schedule, location, travel requirements, benefits or any number of things…but they need a reason. And you need to know how to reach them.

What we are seeing at High Road is anecdotal, but relevant. Over the past year, for the first time in my career, we are getting multiple calls weekly from companies that have been openly and actively trying to fill positions. They are running ads with no results. They may be trying to recruit directly on their own or have engaged search firms. No results. We are getting a lot of calls for front line supervisory talent. Fleet managers, customer service reps, load planners. These are positions we’ve traditionally not worked and, frankly, seldom got calls about. That has changed. There may be enough demand now and with companies stepping up to higher compensation levels, we plan to start actively recruiting for these positions.

And the demand for management and executive talent remains strong. That is not to say that there aren’t people out there who are unemployed or under-employed. But if they are mobile, have a stable work history, solid references and reasonable compensation expectations; they can land a good job.

The biggest constraint to economic growth in the U.S. is not going to be our infrastructure, our tax code or our political circus. It’s going to be a lack of employable people.