What Happens In Tornado Alley


I live in Tornado Alley. This is where I was born and with the exception of a few years in the Southeast and later in the Northern Rockies, it is where I have lived most of my life. And a number of those years were spent living in central Oklahoma, the bulls-eye of Tornado Alley. I was there on May 3, 1999 when The Big One finally hit and devastated the south side of Oklahoma City, namely the suburb of Moore, Oklahoma. When one grows up living with tornadoes, one doesn’t get too excited about them (or at least this “one” never had before then.) But when you see first hand the damage done by a monster tornado, it takes your breath away. It is truly unbelievable.

Last week a tornado hit Granbury, TX and killed six people. On Sunday tornadoes hit Edmond and the outskirts of Shawnee, Oklahoma. Several people lost their lives. It’s that time of year and it’s what happens in Tornado Alley. But then yesterday, a massive, killer tornado ripped through Moore, Oklahoma. Almost the same path as the May 3rd '99 tornado and another one, not as bad, that came through Moore in 2003. I remember watching the one in ’99 on television as it was on the ground for over an hour before hitting the OKC metro area. Everyone knew it was coming. Yesterday’s tornado gave less than 15 minutes warning. And that was best case. For many the warning was much less or none at all until they heard the sirens, if they heard the sirens. The death toll is already higher than it was in ’99 and will likely go even higher. Many of the dead are children who were trapped in the Plaza Towers Elementary School. And among the dead are teachers who gave their lives trying to protect their students.

A large portion of Moore, Oklahoma no longer exists or has been reduced to twisted piles of rubble. People who were alive yesterday are dead today. But, what you are witnessing and will continue to witness in the days ahead will be the best of Tornado Alley, its people. They just don’t come any better. They will turn to God and reach out to one another. Those who have, will give. And those who have lost everything will work to rebuild. I must confess that my faith is weak and I tend to question God in the wake of natural disasters. Some are like me, but most folks in this part of the world will thank God that they are still alive and note that it could have been worse. They will talk about God’s will and quote scripture: “And we know that in all things God works for the good of those who love him, who have been called according to his purpose.” Romans 8:28.

It’s that time of year and it’s what happens in Tornado Alley. I can live with it. I may even be used to it. But, I'll never understand it. Maybe I'm not supposed to. 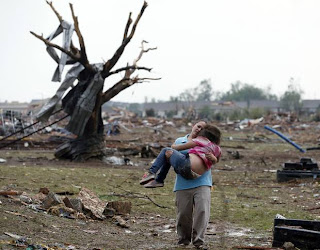 Postscript:5/22/13
Giving thanks to God for the relatively low number of deaths from the tornado. Truly a miraculous outcome. For those who lost love ones, a tragedy of course. But given the circumstances, to lose only 24 people(the latest count)is amazing. Some might ask the question: How can you thank God for mitigating the impact of a disaster He created? If you believe that we live in a fallen, broken world; that is the answer. We live in a fallen, broken world. God intervenes as he sees fit and will "have mercy upon whom He will have mercy" (Rom 9:15). On the other hand, if you believe that God is directly responsible for natural disasters, then you are still left with the fact that He will "have mercy upon whom He will have mercy". Or you can believe whatever you choose to believe. Ultimately, we find ourselves humbled, down on our knees whispering "Surely I spoke of things I did not understand, things too wonderful for me to know." (Job 42:3)
Posted by Neal Click at 6:58 AM