No Flowers In The Field

My dog saw it first.  Barney is an English Springer Spaniel and he doesn’t miss much unless it’s kennel time when he seems to have a hearing problem.  There in the freshly mowed field was a pair of wings, standing upright like flowers.  But it’s August in Texas and, other than sunflowers, there are no flowers in the fields around here.

Barney usually sniffs and then chews on most things he finds in the field.  But, this time he just stood there, looking at the tiny wings and then looking back at me for an explanation.  As I got closer, I realized that he had found a butterfly.  An exceptionally beautiful one at that.  It appeared to have only recently nose-dived to earth finding its final resting place in an almost perfect vertical pose, wings fully extended and intact.  Even the butterfly’s body appeared to be unharmed.  I started to pick it up for further examination, but decided such an artful passing need only be memorialized in a photo.

As Barney and I walked on I had to wonder what happened to this butterfly.  They only live for a few weeks. Had its time come?  Did it just run out of fuel and crash?  Or did it fall victim to an angry wasp or some mischievous dragonfly.  Was it the ruthless, deadly herbicide I use to keep weeds and grass out of the fence row?  Or did it just fly to close to the sun?  For some reason it has remained in my thoughts, this dead butterfly suspended at the end of a perfect dive.

The next day we walked past the same place and it was still there, but one wing had collapsed giving way to the wind and gravity.  Another day later and the butterfly’s remains appeared to be long gone. But Barney was intent on finding a trace and there some twelve feet away from the crash site was a piece of the wing, soon to become dust, yet still shining in the late evening sun.

Since that day, I have looked in vain for a butterfly as beautiful as that one.  Perhaps next spring there will be flowers in the field and another butterfly even more beautiful will appear….at least for a few days. 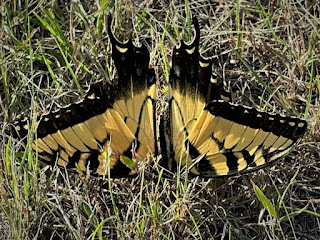