We Will Run Again

I walk my dog most days.  Usually we walk the fields, but when it’s too wet we take to the pavement.  Barney is a two-year old English Springer Spaniel.  We often call him Barney Two or B2.  We had another Springer named Barney but that was years ago, a different time and many different places.

When Barney One was with us I could still run.  We ran many miles together.  And when we lived in Montana, he would go up into the mountains with me.  I would let him off the leash.  But he never ventured too far away and would come running back when I called him.  I always worried that he would run into a mountain lion someday or maybe even a bear.  But he loved being off the leash whenever possible.  So, I let him run.

But the years and a bad knee have ended my running days.  The bad knee has been replaced, but I’m a big guy and the doctor said it would be best if I did not run on it.  I might run if I was being chased or in an emergency.  But for exercise it’s down to walking.  With some recent back problems, even the walking is not what it used to be.  I reckon it’s not more than 3 mph and sometimes less.  Barney Two loves the walks, but I know he wants to run or at least walk faster.  It’s taken a lot of hard tugs and hard words to make him quit pulling.  But when something excites him, he still wants to take off.

At times during our walks he looks back at me as if to ask “Is this the best you can do?  Can’t we just pick up the pace a little bit?”  I think he somehow knows that once upon a time I could do better.  When we show him old photos of Barney One, I wonder if he knows that we ran together, that I wasn’t always old and slow.

We have a large fenced back yard and Barney will run the fence line barking at birds in the field or squirrels in the trees.  Sometimes when I go out in the yard, he will run up and jump as if to say, c’mon let’s run.  It feels great.  Then he will stop and just stand there waiting for a hug because he knows that’s the best I can do until it’s time for our walk.  But as I hug him, I always tell him that someday I will run again and that he and Barney One will be running with me.  Just not today. 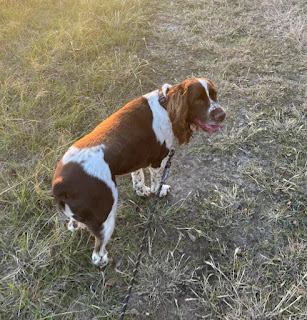