The Declining Return on Humans


As a follow up to my mini-rant about self-driving cars and trucks, I decided this article is post-worthy. Not to say that I agree with everything he's saying, but he does make you stop and think about the future.

Some very interesting comments are made by Viktor Shvets in this article published by Valentin Schmid over at the Epoch Times. Discussing the overall private sector Viktor points to the further advancement of machines replacing humans to increase productivity.

The Macquarie strategist’s brutal assessment of the world economy is fascinating, but not for the faint of heart
Do you feel something is wrong with the United States and the global economy? Despite a respectable recovery and low unemployment, many people aren’t happy with their current economic situation or their outlook for the future. From rising prices for basic necessities or schooling, to harsh competition and low pay for lower income jobs to negative interest rates—the poor and the middle class all have their problems to deal with. Experts in the government or central banks are trying to manage a suboptimal situation but cannot isolate the problem, let alone offer solutions. Or maybe they know what’s wrong but don’t want to talk about it because the truth is too shocking.

Enter Viktor Shvets, the global strategist of the investment bank Macquarie Group. He not only dares to think outside the box but also isn’t afraid to openly voice his opinions, which are fascinating and shocking at the same time.

“The private sector will never recover, it will never multiply money again,” he told Epoch Times in an interview. His main theme is the “declining return on humans,” which means that in today’s digital world, normal humans don’t grow productivity fast enough to justify more jobs and higher wages as the machines are taking over. It takes time to line up machines, and this time we are replacing humans altogether."
— Viktor Shvets, global strategist, Macquarie Group

“There is no productivity on a global basis. Secular stagnation, technological shifts, monetary policy, all are suppressing productivity growth rates,” he says. But what about technology making humans more productive? Shvets says this was true in the first and second industrial revolution where displaced jobs such as horse-cart drivers eventually morphed into higher tech and higher productivity ones like the taxi driver.

However, in this, the third industrial revolution, machines are not augmenting humans, they are replacing them. The self-driving car will completely eliminate the driver. And even in the previous more mechanical industrial revolutions, it often took decades for productivity growth to recover and for jobs to come back, only after higher productivity sectors dominated the majority of the economy.

“We are now on the sharp end of the technology S curve. It started in the late 1970s, it’s picked up in the last 5-10 years, productivity growth rates go down not up.” he said.

And not only lower skilled jobs like taxi drivers are concerned. Just look at the floor of the New York Stock Exchange, where you can barely see a human “specialist” trader anymore. The machines in New Jersey have taken over the trading. 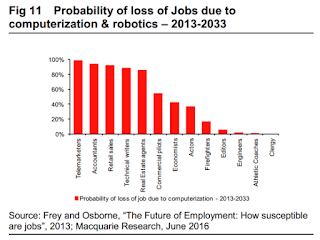 Of course, there are companies and sectors where machines augment people’s productivity, but they are in the minority and also always tether on the edge of machines replacing humans completely. One example is Amazon, where one employee generated $1 million in sales in the second quarter of 2016.

“Parts of the economy become extremely competitive, the rest becomes far less competitive. Walmart’s two million employees are less productive than the few hundred thousand people working for Amazon,” said Shvets. Walmart’s revenue per employee was $220,000 at the end of the second quarter of 2016.

As a result, total productivity growth has been negative in the United States for at least a decade and according to the Federal Reserve Board of San Francisco. The so-called Total Factor Productivity fell almost 2 percent annualized in the second quarter of 2016.

In order to counter falling productivity, households, companies, as well as the government have taken on unsustainable amounts of debt to keep consumption going.

“When the economists say we can continue to leverage, as we have done in the last three decades, it lacks understanding of the balance sheet. Even at zero interest rates, at a certain level of debt, you go bankrupt because the private sector loses confidence in the system,” said Shvets.

"This is the phenomenon of a balance sheet recession, where you have to shrink the whole balance sheet of the economy in order to restore confidence in the system and return to private sector business cycles. Japan is the most famous case; its balance sheet recession is now 25 years old. But also the United States and Europe essentially have the same problem.
Since the beginning of 1980, total debt in the United States increased by a factor of 14 to $63.5 trillion, while GDP only increased by a factor of 6.2.
The debt is not spread evenly, we still live in a tribal world, and it’s easier to start a war than to forgive debt."
— Viktor Shvets, global strategist, Macquarie Group

Shvets says the world should have actually delevered or paid down the debt to return initiative to the private sector, but thinks people could not accept the levels of pain associated with it.

“You could eliminate the impact of the overcapacity through deflation. Nobody is prepared to accept that we might have to wipe out decades of growth just to eliminate leverage. Banks go, there are defaults, bankruptcies, layoffs,” he said.

He thinks the Biblical debt jubilee, where slaves would be freed and debt would be forgiven every 50 years is a nice idea that would also work today if it weren’t for entrenched special interests.

“The debt is not spread evenly, we still live in a tribal world, and it’s easier to start a war than to forgive debt,” Shvets said.

Global central banks with their easy money policies of negative interest rates and quantitative easing are working against a debt deflation scenario, with limited success, according to Shvets.

“That was the entire idea of aggressive monetary policies: Stimulate investment and consumption. None of that works, there is no evidence. It can impact asset prices, but they don’t flow into the real economy,” he said. “Remember, the people at the Fed and the Bank of England are not supermen, they are people with an above average IQ trying to do a very difficult job in a highly complex environment.”

Both overleveraging, easy money policies, and technological shifts are responsible for increasing levels of income inequality across the globe, another hallmark of the previous two industrial revolutions. Fewer people control more of the wealth. According to the World Bank, the U.S. GINI coefficient, which measures inequality, rose from 37.7 in 1986 to 41.1 in 2013. In China, it rose from 27.7 in 1984 to 42.1 in 2010. The higher the coefficient, the higher the concentration of income among a group of people.


THE RISE OF THE STATE

So if the private sector won’t recover until most of the debt gets written off, which won’t happen because neither the people nor the élite want it to happen, who is left to pick up the slack?

“You are essentially in the world where public sector signals dominate,” he said, like the global central banks who are moving markets more than earnings or trade data. “If the private sector refuses to multiply the money, then the state will do that.”

This move toward the state has its own issues, however.

“The public sector doesn’t have cycles like the private sector. Investment theory evolved around cycles. If you are dominated by the public sector, then investment in the traditional sense is no longer possible.”

Business cycle theory centers around the expansion and contraction of money and credit as well as business activity, earnings, and stock valuations. If money and credit are abundant, businesses invest and expand, hire people, and consumption picks up so company profits improve. Stocks tend to rise in tandem with an expansionary cycle.

This is not true for the state, where public investment in infrastructure and central banks printing money create a super cycle with a huge bust at the end. The S&P 500 is trading at an all-time high despite the second most expensive valuations since the 1999 stock market bubble. And despite the fact total S&P 500 earnings fell during every reporting period since the third quarter of 2015. The market is banking on the Fed to turn on the money spigot again at any time.

“The public cycle is aligned with politics. People always avoid radical solutions, so they are doing a little bit here a little bit there to keep the Humpty Dumpty on the wall,” said Shvets.

"Eventually, if the private sector doesn’t recover and the state assumes more power, Shvets thinks countries will move toward fascism and communism again, just like in the 1920s and 1930s whose economic framework is comparable to today’s. The state will decide where capital goes."
— Viktor Shvets, global strategist, Macquarie Group

“Younger people like communism because it is inclusive, paints a bright picture of the future, nobody believes it, but it looks good and young people don’t have anything to lose. Older people tend to be more racist, less inclusive, protectionist, anti-immigration, rather than believing the bright future of everyone holding hands together in a sunny place,” says Shvets.
Either way, the outcome could be similar to the 1930s in Europe and the United States. Less globalization and more power to the state.

“The pendulum is definitely swinging towards the state and the state will decide where capital goes,” said Shvets. One way or another it will have to take on most of the private sector debt, maybe through the nationalization of banking and insurance industries. “It’s impossible to see how you can unwind the economy’s debt load any other way.”

None of the new trends can be described as inspirational or uplifting, but the Macquarie portfolio reflecting the themes has bested the MSCI World Index by almost 30 percent since the beginning of 2015.

“The biggest theme is declining return on humans, the replacement of humans, biotech, augmentation of humans, opium for the people, like computer games and gambling,” Shvets said.

Then there are themes catering to geopolitical risk and potential regional war or civil uprisings, like detention and prison centers, weapons, and drones. Another theme supports the aging demography in the West, so companies holding hospitals, funeral operators, and psychiatric institutions should do well.

On the positives, Shvets notes technological disruptors like Amazon and Google. All those companies should be independent of the government and long-term structural shifts. “They go on no matter what.”