Somewhere in Central Texas, where the state divides between East Texas and West Texas, man-made watering holes become either Tanks or Ponds.  Growing up west of that divide my folks always called them Tanks.   The first time I heard Ponds was when I moved to Paris....the one in Northeast Texas not the other one.  I went dove-hunting with some locals and they said we were going out to a pond.  I thought a pond was a natural watering hole, fed by an underground spring or even just a natural hole in the ground that caught the rain from a creek or something.  When we got to this pond, I saw a big man- made dam that encircled about two-thirds of it.  I commented that this looked like a tank to me...not a pond.

After a few beers,  (Yes, I must admit that we used to drink beer and handle loaded shotguns at the same time.); the locals explained to me the difference between a pond and a tank and why it was an East Texas vs. West Texas distinction.  Their explanation went something like this:

This logic prevailing, I began calling their tanks ponds.  But whenever I went out to my family’s land in Hood County, those were tanks.  And sometime, the smaller ones were indeed dry.

As a boy I spent a lot of time down there in Hood County and some of the best times were at a big tank on my Papaw’s farm.  It was big enough and deep enough that it always had water.  It also had perch, sunfish and bluegills.  That was sport enough for a kid.  My cousins and I would even swim in that old tank, dodging floating cow patties and the occasional cottonmouth.  Today, adults would go to jail if they allowed kids to get in that water.  But we had fun, didn’t get snake-bit or sick, and it probably made us immune to most things that seem to infect people these days.

So, of course, now that I live on a little piece of land up here in Grayson County, I had to have a tank...or is it pond?  Grayson County is in that transition zone between East and West Texas.  It’s north of I-20 and east of I-35, so it cannot by any means be called West Texas.  That’s a rule.  Most of the time we avoid the issue by just calling it The Texoma Area, Texoma being the big lake on the Red River dividing Texas and Oklahoma.  But, the real clue to our location is what the Graysonians call their man-made watering holes....Ponds.

So after spending time and money digging up a chunk of land, I do not have a tank...I have a pond.  It’s a nice pond, but it doesn’t feel right.  Ponds are for people who always have water.  Their grass stays green and the cows are always fat.  White fluffy clouds hang in the sky.  Cranes come to ponds for their fish.  Deer drink water from ponds.  Ponds are clean and picturesque.  Ponds always have water.  Tanks go dry sometimes.  Old beer cans and the remnants of shotgun shells litter the ground around tanks.   Artists paint ponds.  Real Estate agents photograph tanks and then touch them up to make them look like ponds.

Ponds are for the right brain.  Tanks are for the left brain.  Now when you look at the Texas map it makes sense.  East Texas, with its ponds is on the right.  The tanks of West Texas on the left.  I’m still going to call my watering hole a tank…but my wife calls it a pond.  As usual, she is right.

But I am a tank guy.  If my pond has water in it today, it will go dry tomorrow.  Skunks and feral hogs will end up drinking the water, not deer.  Fish will die and mosquitoes will thrive.  Someday the dam will probably break.  My tank will never be a pond. 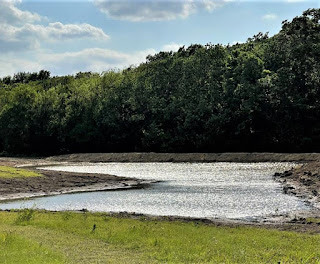