Up until last year, I had been making predictions for the New Year.  Covid turned the world upside down in 2020 and there was no way I could even begin to imagine what 2021 might look like.  Now in late December 2021, it’s still an upside-down crazy world and who knows what 2022 will bring.  Even though I made no predictions about 2021, I thought it might be fun to look back on the year.  What was Good, what was Bad and what was just plain Ugly?  Some of these are personal and some are ripped from the headlines.  It’s not an exhaustive, all-inclusive list and I’m sure there are some major events that just didn’t resonate all that much with me.  So here is my own personal list of The Good, The Bad and The Ugly for 2021.  I’ll start with the Ugly and work my way up to the Good.

It doesn’t get much uglier than the January 6 assault on The United States Capitol.  I know, I know…blue state authorities and the main-stream media looked the other way or downplayed dozens of protests that turned into major riots and did far more damage than was done at the Capitol on January 6th.  But invading the Capitol building crossed the line.  It was a dark day in America’s history and showed that the extremists on the right are just as crazy as those on the left.  Ugly.

The battle being fought over what gets taught in our public schools got uglier in 2021.  Some of the ugliest encounters occurred at school board meetings where angry parents protested the way in which Critical Race Theory (CRT) was being presented to their children.  Interestingly, some of the most vocal critics of CRT were parents of color who feared that this ideology of itself was racist and only made things worse.  This debate is far from over and will be a major hot spot in the mid-term elections.

Crime, violent crime, is spiraling out of control; especially in cities and states where ultra-progressive leadership has endorsed such things as “defunding” police departments.  The disconnect between many of these communities and law enforcement has only made the urban jungle more dangerous, deadly and ugly.

And then there is The Border.  It’s never been uglier and now citizen militias are being called in to help control the invasion.  To be clear, we need immigrants.  We have a serious labor shortage in this country.  I welcome anyone who is willing and able to work.  But, it has to be managed and at this point our government has been an epic fail when it comes to managing the border crisis.

And my final big ugly is the Supply Chain.  The global economy has been tiptoeing along the precipice of a supply chain failure for years.  When purchasing, manufacturing, inventories and supply chain channels are all being simultaneously coordinated to minimize costs something was bound to give.  Corporations may say they want to operate better, faster and cheaper.  But what they really mean is good enough, fast enough and at the lowest possible costs.  And this truly is the lane where free markets operate best.  Most of us benefit from the global competition to provide us with the stuff we want, when we want it and at a price we are willing to pay.   But the pressure to do that and still make a profit doesn’t leave much room for error.  Increase demand for goods vs services;  give people more money for doing nothing; have a container ship go sideways in the Suez canal blocking a vital link in the chain; finally reach the tipping point where there are no longer enough truck drivers to move the freight, disrupt the inflow of materials and supplies required to make stuff and then disrupt the outflow of finished products to the marketplace; mix and stir in the shadow of a global pandemic and you pretty much end up with what we have today:  higher prices, shortages and plenty of finger-pointing.

The Great February Freeze in Texas was quite an event and it was bad.  Our family was very fortunate. We never lost power and did not experience the devastation that impacted so many people.  My sense is that our power grid is still not up to handling extreme weather and the ultimate test will come one of these summers when it gets crazy hot for days and weeks on end.  We haven’t had one of those in a long time and there are now a whole lot more people and places in Texas to keep cool than there used to be.

And then we have a drought this fall.  After a cool wet Spring and Summer, it warmed up and dried out and has stayed that way for months.  With the forecast for Winter looking warm and dry, Texas and Oklahoma are primed for some major wildfires.  Those are always bad.

Another “bad” for yet another year was network television.  The programming on NBC, ABC. CBS and FOX is laughingly bad.  And that’s not even counting the News which is in another category beyond bad.  I don’t see how their business models are sustainable and the programming is a joke, a bad joke.

Inflation has gotten bad and may get worse.  Between supply chain issues, labor shortages and some misguided energy policies;  the cost of living has gone up significantly.   And it’s particularly tough on lower and middle income folks.  When energy and food costs go up it takes a bigger bite proportionately out of their incomes.  This will be another key factor in the mid-term elections.

And one cannot ignore just how bad the Biden-Harris administration has been.  I am a not a hardcore Trumper, but I did vote for him because the Democrats have gone off the rails.   Nevertheless, after Biden won I thought maybe it would be ok or at least not terrible.  The bar was set pretty low for Biden and he hasn’t come close to getting over it.  And VP Harris is just a train-wreck.

Then there was and is Covid.  Delta, now Omnicron and Delta.  It’s bad and likely to get worse for a while before it turns around.  What’s even worse is that it has become just one more divisive issue in a country that is already way too divided.

The Good. (These are certainly more personal and won’t mean as much to most folks.)

Rain and cool weather.  We had a wet, cool Spring and early summer.  If you’ve lived in Texas a long time, you realize what a blessing that can be.  We dug a new pond on our place right before the big freeze and for a while it was mostly empty.  And then it rained and rained and rained some more.  The pond filled up, surrounded by green grass and wildflowers.  It was a beautiful thing.

It was good that my bees survived the great freeze.  Somehow they hunkered down, ate their honey and lived.  Then we had a huge honey harvest later in the year.  Bees are amazing.

My  English Springer Spaniel, Barney, was a year old this summer and is finally settling in to being a member of the family.  I need to take some time and train him because he’s really smart.  We walk each other through the fields before sundown and he lays across my lap every night watching television.  Barney is a fan of Masterpiece Theater and most anything on Britbox.   Scenes of the English countryside fascinate him.  And he loves classical music.  He thinks it is his mission in life to turn me into a proper English gentleman.  He will eventually figure out that it’s way too late for that.

Business was good.  High Road Partners had a great 2021 and my wife’s real estate business continues to grow.  She had an exceptional year and loves what’s she’s doing.

We were both healthy in 2021.  And that’s a very good thing.  We have been vaccinated and recently got the booster shots.  For those who choose not to get vaccinated, that’s their choice.  I expect the vaccine is not 100% safe and we know it’s not 100% effective.  But I’ll take my chances with the vaccine rather than take on Covid unvaccinated.  On balance, the vaccines are a good thing…and so is freedom…up to a point.  I’ll just leave that there.

And I’ll wrap this up with the Greatest Good of all, Jesus Christ.  My faith journey has always felt like one step forward, two steps back.  But the older I get, the more I realize that it’s not my steps but His steps that really matter.  By His grace I am starting to see His steps more clearly now.  And I know that I am forgiven for the bad ones I’ve taken on my own.  We never find peace within ourselves or with others until we find peace with God. 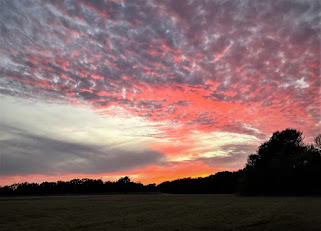