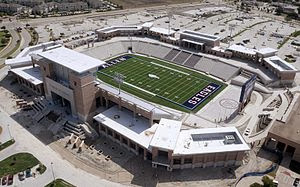 Why did Allen, Texas build a $60M football stadium? Simple answer…BECAUSE THEY COULD. Why are people all over the nation, including many in Texas, now cracking up over the news that Eagle Stadium is…wait for it…cracking up? Simple answer…HUMAN NATURE.

When it comes to spending money on sports and entertainment; and make no mistake, Texas High School Football is big-time entertainment in these parts; Americans in particular are willing to spend money. Their own as well as that of the taxpayers. Just the tax exemptions alone on municipal bonds issued for the building of sports complexes cost the U.S. Treasury nearly $150M per year. The city of Arlington TX borrowed over $300M via tax-exempt bonds to help Jerry Jones build the Cowboys’ new stadium. And it is turning out to be a good deal for Arlington. The stadium is constantly in use for sports and entertainment venues (most of them, oh by the way, vastly superior to Cowboy games) and the economic impact on the city of Arlington is huge.

Allen, TX envisioned a similar outcome from their investment. It’s not just about high school football. It’s about other sporting events, concerts and revivals (don’t forget, this is the Bible belt.). For the time being, those cracks in the stadium are a minor setback and probably brought about by the hand of God to teach a lesson in humility to the folks in Allen.

But the bigger question for all of us is how much money should we spend on sports and entertainment? What do our tax codes and our personal spending habits say about our priorities. How do we spend our time? I promise you that aside from work, I spend more time watching, reading and talking about sports than anything else. At the end of the day, most Americans must admit that they are more interested in sports and entertainment than they are in the health, education and welfare of themselves or the fellow citizens. We won’t take the time to vote, go to church, help someone in need or even just read a book; but we will find the time to watch American Idol or our favorite sport. So don’t feel too smug about the cracks in Eagle Stadium. We’re all standing on shaky ground.