A Five Pound Sack of Sugar

It was a hot day in the summer of 2009 when Kayla and I drove down to Tolar.  We were going there to pick up a little Bichon puppy.  We already had one Bichon, Dillon, who was getting up in years and needed a buddy.  Or at least we thought he did.  Or maybe we just wanted a puppy.  After a rough patch in our marriage, things were settling down.  We had moved back to Texas and this was where we would stay.  Time for a new dog to share our new life.

We had already picked out the name, Boudreaux.  The breeder had sent us his photo and he just looked like his name should be Boudreaux.  Over time we added more names.  He was Boo, or Boo-Boo or Boody Man.  He answered to them all with a tail wag and a happy face that seemed to say I am so glad you spoke to me.

That day in Tolar, when we first met Boudreaux in person, it was love at first sight; for him and for us.  I remember picking him up and saying, “You’re just a five-pound sack of sugar aren’t you?”.   He answered me with dog kisses and panting puppy affection.  He would eventually grow up to weigh twenty pounds, but he never stopped giving kisses or being affectionate.  He was always the same sweet puppy we met that first day.

Boudreaux was the complete opposite of Dillon who tended to be moody and neurotic.  Sometimes Dillon wanted to be petted and sometimes just to be left alone. But Boudreaux and Dillon got along well.  And I have no doubt that Boudreaux’s attitude and positive energy added years to Dillon’s life and, in the end, made Dillon a better dog.

Not long after Dillon passed away, we got Brodie, a Bichon-Havanese mix.  Brodie was a two-and-a half pound sack of sugar with lots of spice.  But he and Boudreaux got along great and became fast friends and allies.  We got a larger kennel so they could stay together and they truly became inseparable.  As Boudreaux aged, Brodie became his little protector.  When we brought Barney, an English Springer, into the family; it was Brodie who would jump on Barney and straighten him out when he played too rough.  Boudreaux, as always, just went with the flow, allowing Barney to chew on his tail and paw at his ears until Brodie came to the rescue.

But in this world, nothing last forever.  This week, Boudreaux took his last ride.  It’s only five miles to the veterinarian, but I wish it had been five hundred.  Just a little more time.  Some months ago the bloodwork from Boudreaux’s annual physical indicated liver problems.  We were concerned and he was given some medication.  Not long ago his bloodwork had shown improvement.  We were encouraged.  But then last week Boudreaux stopped eating.  He had been a bit “off his feed” for a week or two.  Nothing to worry about, or so we thought.  But, he quickly went downhill.  After two days at the vet’s, the outlook was grim.  We brought him back home, praying that he might rally.  He was glad to be home and tried to soldier on.  But he would not or could not eat.  When he drank water he threw up and it was not just water coming out of him.  He was dying.  The vet assured us that other than nausea, he was not in pain, but the end was inevitable and would come soon.

His last few days with us were spent sitting in Kayla’s lap or lying in his kennel next to Brodie.  When he went outside he would perk up for a moment or two and then lay down.  Once he saw me walking Barney in the field next to our house and somehow mustered the energy to wobble out to the fence, but he could not manage to bark.  Seeing Boudreaux trying to run, attempting to be his old self, broke me.  I somehow stumbled through the rest of that walk, tears running down my cheeks and Barney looking up, wondering if he had done something wrong.   I do not cry easily, but during the last days with Boudreaux, I cried often and I cried hard.

In the end, Boudreaux was at peace, ready to go.  And even though we were not ready, one does what one must do.  His ashes will take their place on the shelf alongside those of our first Springer, the original Barney; and Dillon, the cranky old Bichon uncle who showed Boudreaux the ropes when he was just a pup.  We will desperately miss him and today our hearts are broken.  But I take comfort knowing that little sack of sugar is in a better place and heaven just got a whole lot sweeter. 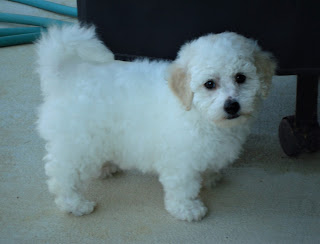